I’ve been working on image object detection for my senior thesis at Bowdoin and have been unable to find a tutorial that describes, at a low enough level (i.e. with code samples), how to set up the Tensorflow Object Detection API and train a model with a custom dataset. This aims to be that tutorial: the one I wish I could have found three months ago.

I don’t know much about advanced Machine Learning concepts, and I know even less about Tensorflow. If you’re like me, you’ve heard of Tensorflow as the best Machine Learning framework available today, and you want to use it for a very specific use case (in my case, object detection). You also don’t want to spend months studying what seem to be Tensorflow-specific vocabulary and concepts.

Similarly, if you’re like me, you have some familiarity with Linux and Python. I’m a programmer more than I am an ML researcher, and you’ll probably grok this article most if you’re in the same boat.

Finally, I assume you have Tensorflow installed—at the very least, I assume you can run the “getting started” block of code on the Tensorflow Tutorial page. If that runs without any errors, you should be good to go. If not, this might not be the tutorial for you, and you should get that working before coming back here.

Since this is a complicated process, there are a few steps I’ll take you through (and therefore, a few sections this article will be broken into):

Finally, during the training step, we’ll set up TensorBoard, a browser-based training visualization tool, to watch our training job over time. Using this model in a different environment (like a mobile device) is, unfortunately, beyond the scope of this article.

Step One: Set up the Object Detection API

This section will lead you through four steps:

You’ll need a new directory for all of our future work steps, so start by creating one and changing into it.

The Object Detection API is part of a large, official repository that contains lots of different Tensorflow models. We only want one of the models available, but we’ll download the entire Models repository since there are a few other configuration files we’ll want.

Once that download is over, we’ll copy the files into a new directory.

The Object Detection API uses Protocol Buffers (Protobufs), a message serialization and transmission framework, for some reason I’m not entirely sure about. We need to download and compile Protobufs, however, to get the API to work.

Downloading and unzipping Protobufs will create a bin directory in your obj_detection directory.

At this point, you’ll need to compile the protobufs. You need to move into the my_project directory and run the compilation script from there, since there are import steps that make assumptions about the location from which you’re running the script.

With Protobufs downloaded and compiled, the Object Detection Python module has to be built. This will create a build directory in your my_project directory.

The following commands should be run from your my_project directory: the place you cd-ed into in the last step.

When you’re done, you’ll have a directory structure that looks like this:

Finally, the following command will test your setup: if you get an OK at the end, you’re good to go.

You might not get an OK at the end. Unfortunately, I can’t troubleshoot your setup for you, but I can tell you that when I was troubleshooting my own, the most finicky part I encountered was setting the PYTHONPATH correctly; we did this above with the line that began with export.

StackOverflow actually works pretty well to figure out what other things you should put in your PYTHONPATH I had an issue finding libcublas.so.9.0; for me, that meant running $ export PYTHONPATH=/usr/local/cuda-9.0/lib64/:$PYTHONPATH.

If you leave the project for a while and come back, you’ll have to run all the export lines again to restore your PYTHONPATH. I created a bash file that ran all the necessary export commands, and I would run $ source setup_python_path.sh whenever I logged on.

For completion’s sake, I also include the line export LD_LIBRARY_PATH=$LD_LIBRARY_PATH:/usr/local/cuda-9.0/targets/x86_64-linux/lib/ in my script; running the test script wouldn’t work without it. This is probably relevant only to my computer, but it might help you out too.

Since the API we’re using is based on object detection, you’ll need to have a dataset you want to work with. This dataset should be comprised of images and annotations in whatever format you choose: I had JPGs numbered 0.jpg through 9999.jpg and a CSV file with the coordinates of the objects I’m detecting. 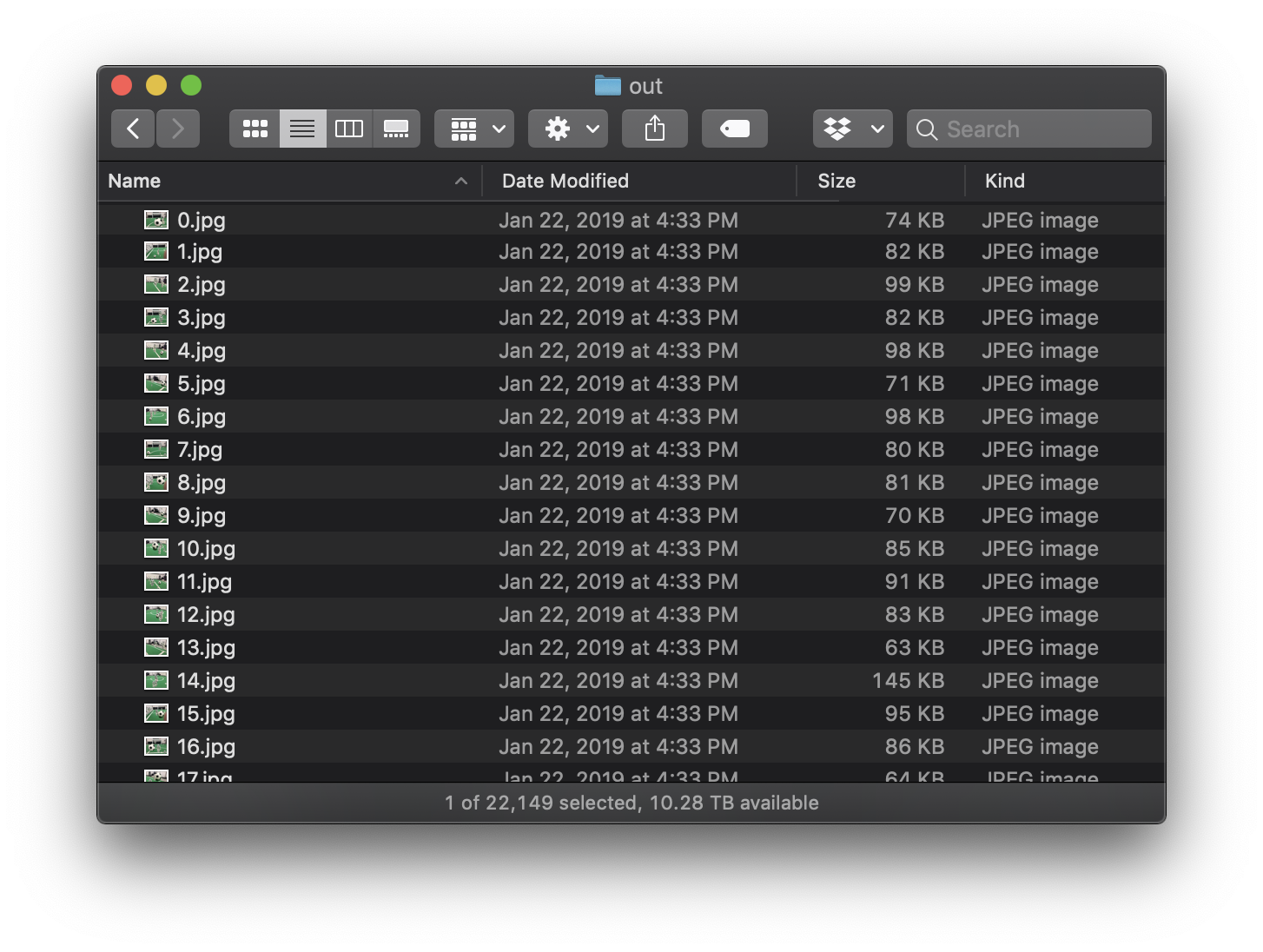 You’ll probably have two of these datasets, one large one for training and one smaller one for testing. We’ll be taking the two datasets and transforming each of them into .tfrecord files: large binary files that contain a complete representation of the entire dataset.

I wrote a Python script to do this. The script reads in each image in a directory, reads the corresponding line in a CSV file, and appends the TFRecord with the image data and the associated coordinate data. Your script will probably look different since this is based on my dataset and this will be based on yours.

Remember: If you’ve logged out of your shell since setting up your Python path, you’ll have to set it up again before running this script.

Make sure you know when your script is done running — a print() call should do just fine. When you have your two completed .tfrecord files (one for the training dataset and one for the testing dataset), put them somewhere and hold onto them for later.

While this tutorial describes how to train the Object Detector API using your own data, it isn’t describing how to train a model from scratch. This distinction is important: instead of starting from nothing, we’ll be starting with an existing, generalized object detection model and continuing to train it based on our own data. Models, in Tensorflow’s world, can simultaneously be independent entities and checkpoints, meaning that after training a model for a long while, you can either pack up and call it a day and use that model in the wild, or you can stop for a bit and resume training later. We’re doing more of the second option, although instead of resuming the exact same training, we’re nudging an existing model (which I’ll call the baseline model) towards the object detection we want it to be able to perform. This lets us get some results fairly quickly — the existing models have been trained on very high powered computers for a very long time, and our tweaks take only a little bit of time.

The Object Detection API provides a set of these baseline models; they allow you to either use them out of the box or initialize new models based on them. I used “SSD with Inception v2 configuration for MSCOCO Dataset,” but you might want to use a different baseline model depending on what you’re trying to detect. To download the one I used, run the following command:

Training and testing happen at the same time — the scripts in the API run a testing step after every training step. To begin the training/testing, we’ll first need a configuration file; the configuration file framework you use depends on which baseline model you’re using. (If you’re not using a baseline model, you can either write your own or modify one of the given ones.)

The configuration I used is below, and originally comes from the Object Detection API’s sample configs. The file gets saved in your working directory as mymodel.config (although the actual filename doesn’t totally matter). I’ve marked within the file the lines you should modify, and kept the original comments as well.

Finally, you’re ready to run the detector. Put the following into a file called run.sh:

And finally, you can run that script ($ ./run.sh) to get the training job started.

TensorBoard is a program that comes with Tensorflow that starts up a local web server and hosts a dashboard to show the progress of the training and testing job. You can set up Tensorboard to watch your model directory (./object_detection/modeldir) and it can describe the progress of your training job.

In a new terminal (so as to not disturb your training job), navigate back to your my_project directory, reconfigure your Python path, and then run:

With that running, you can navigate to http://localhost:6006 and watch the graphs go by over the next few hours or days

I wrote this up because I couldn’t find a tutorial online that went through these same steps, so I hope this ends up being helpful for the next person who wants to embark on this same journey.

I’m also sure I got some things wrong; reach out if I have an error and I’ll work to correct it.

I clearly looked up a lot of ways other people were doing this. Unfortunately, due to the nature of online research, it will be impossible for me to list everything I encountered on the internet that helped me along the way. However, here is an incomplete list of sources (and an implied list of apologies to those who I forgot):